The LEP servant droid, commonly nicknamed the "rabbit droid", was originally manufactured to assist parents with childcare. The droid's assistance was generally well-received until a major design flaw came to light; the locking storage compartment in its chassis could allow the children it was watching to crawl inside and become stuck. After this flaw was exposed, the droid's designers modified its purpose from childcare to that of a general servant droid.

LEP servant droids have a high voice and can speak in both a variation of binary or basic. The droid has ear-like appendages on its head that can be used to hold a hologram transmission projector. They are also highly dexterous as a results from its original design for childcare, and one of the droid's common tasks is also to fetch refreshments for its owner and their guests. the LEP droid is even used as a waiter, though its thin arms prevent it from carrying any item of substantial weight. The droid also has the ability to negotiate for its owner like many other protocol droids, and is occasionally sent in place of a sentient for basic negotiations.

Like many protocol droids, the LEP servant droid seems to have a cowardly personality due to the self-preservation programming it has installed. They droid has not seen wide use throughout the galaxy due to its limited availability and capable competitors in the market. Recently, however, some unused models were discovered in a few old warehouses throughout the galaxy and the LEP servant droid has seen a renewed use. 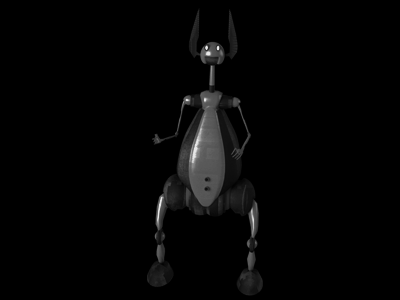