Medical items will let you restore your own, another player's or an NPC's HP.

They can be produced by any medical faction.

To use a medical item, the following conditions must be met:

While being part of a medical action, neither you nor your target can move. Additionally, when applying a medical item, your target is automatically removed from your party. Before being put into a Bacta Tank, the target automatically drops all equipped items.

Trading factions may produce counterfeit medical items or drugs which look exactly like some medical items. These drugs are mainly made from Ryll and are cheaper to produce. However upon using them as medical item, they can have negative after effects and wound rather than heal.

To use a medical item on someone else, you have to apply it via the Item screen or - in case of the bacta tank - load the patient into the tank. After using a medical item, the following thing will happen to the medical item:

The amount of HP being restored depends on the following formula:

If the healing is being done within an entity that contains a medical room, the healing power of all medical items is increased by a factor of 1.3:

You do not have to be inside the medical room for the bonus to take effect.

The experience (XP) gained from healing is half of what the restored HP was. Bacta Tanks are limited to a maximum of 30 XP before scaling.

He has a Medical Skill of 2.

He applies a Bacta Patch to heal his wounds.

Bacta Tanks will fully heal the patient. However, if they are contaminated with Ryfill, the patient's health will be set to a random point between 1 and the patient's max HP, even if this is less than the patient's current HP.

Once deployed, the tank can be loaded with up to three Bacta Refills. Once a single refill is loaded, the tank cannot be undeployed, nor can the refill be taken out again. You cannot load more than three refills.

Once three refills have been loaded, you can apply the tank to a patient (either yourself, another player or an NPC in your party). At that time, the patient will drop all items he's carrying and is loaded into the tank. He will be ejected in 10 hours, once the healing process is completed.

You may only monitor a limited number of Bacta Tanks at once. 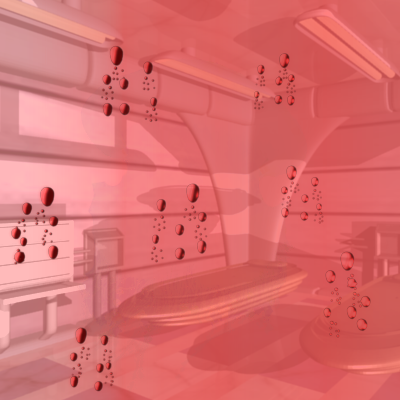 Inside a Bacta tank

Any player can add an unconscious player to their party, and a Bacta Tank can be used to heal them above 0 HP.

Bacta Tanks can be flushed, removing any previously loaded Bacta Refills (or Bacta Ryfills) in the process. This can only be done if no patient is present in the tank.

Bacta Tanks are limited to a maximum reward of 30XP per patient.
« Back To Top

The following entities contain one or more medical rooms, and thus the healing power of any medical item used within them is inreased by a factor of 1.3.