Jetpacks are not so much a transportation device, as they are a quick way of getting out of trouble. Fast and powerful, a jetpack is able to get the user to off the ground with a single burst; covering a surprising distance in a short amount of time.

Most jetpacks are powered by a liquid fueled pulse rocket encased in a heat diffusing metal shell. They are usually activated by a control panel in the wrist or a microphone in the visor or helmet. Many common types of combat armor include optional mounting attachments and thermal shielding to protect users from the extreme temperatures generated by chemical combustion.

At 40 kilograms, the jetpack is too heavy for average civilian use. Amateur users also run the risk of turning into a sentient fireball if safety precautions are ignored. Additionally, limited fuel capacity hinders range and many units require up to one galactic day to be refueled and prepared for flight once more. Despite these flaws, many elite troops and wealthy military forces use this kind of transportation for aerial strikes and quick withdrawal from the battlefield, with a smoke cloud produced by the combustion serving as cover.

Considering the variety of species to which they are catering, many manufacturers provide directions in a simplistic language. This has led to a running joke among users that the only required directions state: "Put on pack, push button, make fly. 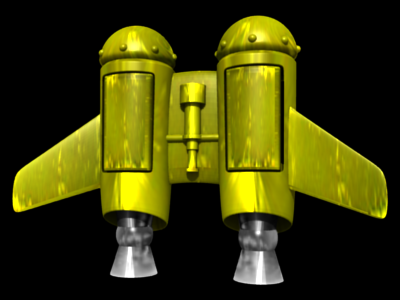