A grappling hook is a tool consisting of a multi-pronged hook and an attached length of cord that typically allows one to scale large objects like walls or cliff sides. When used in an urban setting, it can allow access to upper-level windows or even rooftops. Each grappling hook can be fitted with an automatic or manually retracting device, which usually has the effect of helping the user get closer to the deployed hook, rather than moving the hook to the user; this is due to the fact that the hook, when deployed, either catches on a ledge or embeds itself into the material at which it was fired.

The earliest type of grappling hooks are reported to have been discovered around ninety millennia ago and can be traced back to the Kashyyyk system; these earliest tools had to be thrown for the user to reach the intended area. Modern grappling hooks can be attached and fired from certain types of blasters so they can achieve distances farther than ever before, though the manually thrown versions can still be found in most utility belts. The cords attached to the hooks, while once made out of natural, fibrous rope which had a moderate rate of failure, are now created from highly-durable synthetic materials and are almost unbreakable unless they are extremely worn-out.

Occasionally the grappling hook has been used for purposes other than simple ascension. They have commonly been used as tow cables in a pinch. It's also been reported that some have used these devices to swing across pits in caverns or between high-rise building in densely-populated areas. A rumor has even circulated that an escaped prisoner and her accomplice once used one to evade their captors in a similar manner, allowing them to flee a highly secure prison facility.

Additionally, there was once a Chiss bounty hunter that went by the name Jessa Tuain, who strangely enough, used a grappling hook as her weapon of choice. Similar to weapons used for hunting, such as the spear gun, the hook she used had a sharpened tip so when she fired it at the target the hook impaled it. This allowed her to pull in her bounty with minimal effort, as the hook threatened to rip out large sections of flesh (or even dismember body parts if it'd hit a joint) unless the target immediately stopped resisting. Extracting the hook from the individual was carried out by means of a mechanical switch that allowed the prongs to retract into the central core once the bounty was subdued; scarring was inevitable. Unfortunately, the accuracy of this particular item when used as a weapon leaves a lot to be desired, and on more than one occasion the bounty hunter accidentally killed the target when the hook pierced a vital area; it is perhaps for this reason that most sentients choose to use the item as a tool rather than a weapon.

Almost all militaries outfit their soldiers with this tool as part of the utility belt, while the more unsavory sorts in the galaxy purchase grappling hooks to help them in entering areas by means other than the primary entrance. Regardless of the method in which it is used, the grappling hook is still a popular item in the galaxy and sales continue to be strong among most all strata of society. 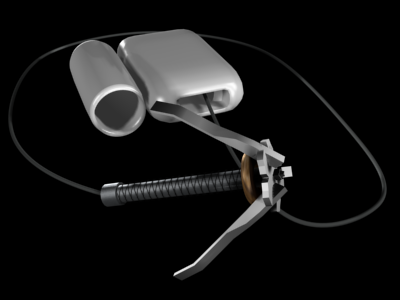