The SC-401 Stun Cuffs, or better known simply as "Stun Cuffs", are upgraded versions of earlier magnacuffs. As magnacuffs came into wide usage by various law enforcement agencies and crime syndicates, it became evident that they kept the prisoner's hands and arms restrained, but proved ineffective at preventing the prisoner from escaping on foot. To solve this issue, the magnetic fields used by the cuffs were exploited.

An intelligent, yet unknown inventor discovered that the magnetic field emitted by the magnacuffs could be manipulated to stun the prisoner, rather than just holding the cuffs together. This characteristic alone caused the innovative Stun Cuff design to quickly replace its predecessor and became a popular restraint throughout the galaxy.

Made of durasteel, the stun cuffs are designed to be adjustable to allow them to fit on to any species' wrists, from small Ewoks to large Wookiees. Lined with sensors, they will also tighten around the prisoner's wrist if they strain against the device. In most cases, stun cuffs are able to subdue the prisoners with the shock that is emitted by them.

However, there are situations when the stun cuffs are not effective, or in some cases, too effective. If a prisoner is able to resist, despite the shocking feature, the cuffs will begin tightening around their wrists, and in some cases to the point of breaking bones. This safety concern causes some law enforcement agencies to refrain from using them, instead going for the cheaper and safer solution of binders.

While many governments and criminal syndicates use binders for routine restraint, those who deal with dangerous or powerful individuals usually prefer stun cuffs. Many prisons also rely on stun cuffs to control large groups of inmates, due to the ability to use one remote for several cuffs. This allows a single warden to control their prisoners from a safe distance. Due to these reasons the Stun Cuff maintains a presence in the galaxy, despite its competition. 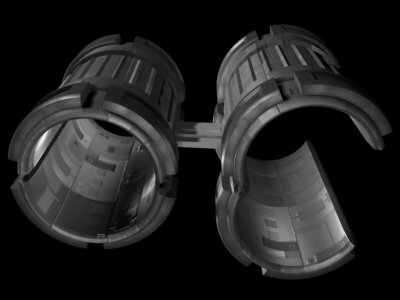