After the resounding success of the AT-AT, Imperial military engineers decided 'more was better' and sought a way to increase the fear-inspiring might of their juggernauts. The INT-4 was conceived as a short range interceptor and reconnaissance craft to be launched from the bodies of the mighty walkers, which would enhance the shock-and-awe effects associated with their deployment.

After construction and testing, the INT-4 enjoyed a successful, if short, life on the battlefield. Resembling a legless, flying AT-ST, it was a capable vehicle. Many AT-AT pilots liked the idea of a flying support craft, but Imperial command felt the cargo space of an AT-AT was better suited to Stormtroopers and smaller ground based vehicles which could secure the territory the walker had just taken. Like so many other concepts that lost their usefulness, the INT-4 was either put into storage or sold off to make room for other projects.

The INT-4 is little more than the head of an AT-ST outfitted with a repulsorlift and small stubby wings on either side. It retains a single medium blaster mounted on the "face", but no other armaments or shielding. Lack of frills means the power plant devotes all its energy to speed, rather than systems and, despite the clunky design, the INT-4 handles as well as a more traditional air speeder. Originally designed with larger cargo capacity and cockpit, the extra room was later removed in favor of greater sensor capabilities. The INT-4 is commonly employed by scouting and providing a mobile security presence on lesser planets where larger resource allocation was not deemed necessary. 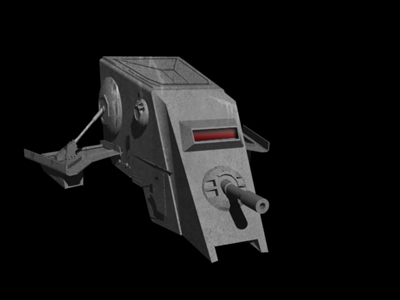