The ISP-6, also known as an Imperial Shuttle Pod, was designed and commissioned by the Galactic Empire for use primarily in solo planetary reconnaissance work. It resembles another craft in the Imperial arsenal, the Lambda-class shuttle, from which its creators borrowed the folding and tri-wing designs.

The ISP-6 is lightly armored and carries a pair of light blasters, one mounted on each wing to either side of the cockpit. However, the weapons are only for emergency use as the greatest advantage of the ISP-6 is its speed. The ship's size, tri-wing configuration and tightly angled hull allow it to achieve exceptional speed and maneuverability.

A drawback to the size of the vehicle is that it leaves very little room for other systems, including the cockpit. The cramped cockpit contains nothing more than a yoke controlling both flight and weapons, and the most utilitarian of Heads Up Displays (HUD). As such the firing of the weapons relies primarily on a pilot's skill rather than technologies such as sensors or targeting systems.

The ISP-6, proving successful in its purpose, was made obsolete and eventually replaced by newer designs. Despite being decommissioned, a limited number of these ships made it into the private sector where they can still be seen in use. 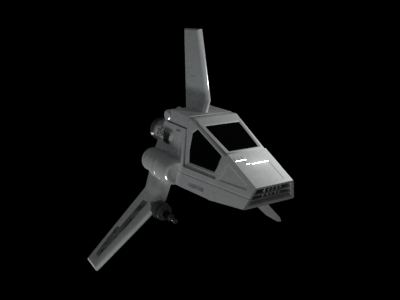