The Skybird racing swoop is among the cheapest civilian swoop bike models and is described by it manufacturer as "a very basic single passenger, unarmed swoop." In reality, it's barely more than just a seat welded to an engine and steering vanes. However, because of the price, the Skybird is popular with credit-strapped teens that later plan to upgrade to one of the more advanced swoop bike models.

The Skybird's light frame makes it among the smallest and most fragile repulsor-crafts of its type. Despite being much smaller than other swoops, the designers were able to maximize engine output and steering, which allows it to be faster and more agile. Unfortunately, the speed and fragility also makes it a very dangerous vehicle, more so than most of the other bikes on the market. No safety devices are available for this vehicle, which almost always assures death or dismemberment for riders in the event of an accident; which hasn't seemed to deter buyers.

One of the largest complaints against the Skybird is that it doesn't have enough space for teens to put their stuff. Designers apparently have looked into trying to add a bit more cargo space but in the end decided that it was more cost-effective to leave it out, despite the complaints. 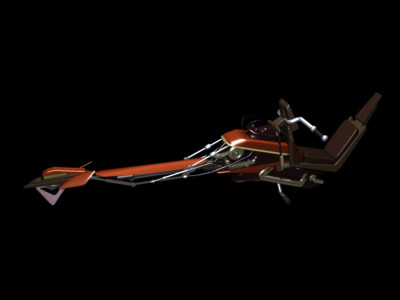