The 008 heavy landspeeder is an armed and armored repulsor vehicle designed and produced by Aratech to fill a variety of military oriented roles. It is ideally operated by a three man crew that usually consists of a pilot, a gunner, and a mission specific crew member, often a vehicle commander or communications specialist. The craft is protected by a thick layer of durasteel armor plating, giving it some of the heaviest defenses available for a military landspeeder today. Its armament consists of a front mounted heavy laser with a pair of medium blasters covering the rear, giving the 008 series firepower comparable to many main battle tanks in a more mobile package.

Due to the armor plating and weapons, the 008 is heavier and bulkier than any other speeder in its class. Its chassis was designed from the ground up to accommodate the large payload while keeping the size profile as close to the average three man speeder as possible. This resulted in some space saving decisions on the part of designers, such as the inclusion of more compact engines and power plant into the frame instead of bulkier, more powerful versions. Thus, while notably swifter and more agile than other heavy ground vehicles, when compared to other speeders, the 008 is slower and less maneuverable. The heavy armament combined with the smaller power plant also means the vehicle is prone to overheating when all weapons are fired at once, sometimes resulting in a drop in power to its flight stabilizers as the computer attempts to compensate.

Despite this flaw, resulting in some loss of stability during prolonged conflict, the 008 heavy landspeeder has impressed many with its performance on the battle field. In its days as an armed security force, the Antarian Rangers employed squadrons of 008's as urban patrol vehicles, keeping the streets of their cities and bases safe. These landspeeders have also been seen across the galaxy as secure transports for VIP's and as troop support vehicles in armed conflict. 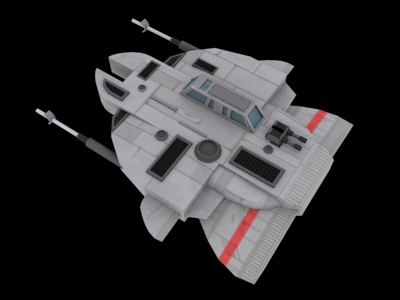