Designed by Collor Pondrat, the Plug-2, nicknamed the Behemoth by racers, is a popular twin-engine pod-racer. Reaching speeds of up to 775 kilometers per hour, the Behemoth has one of the largest engine sets ever built, with colossal front turbines for cooling, leaving it with no competition performance wise. While this system gives the Behemoth a much higher flight ceiling than other pod-racers, it hampers the racer's ability to hug the track and crowd out competitors due to the risk of debris clogging the turbines.

This flaw was demonstrated soon after the Behemoth entered the market, when loose rocks from the track were sucked into the turbines and turned the racer into a speeding inferno. The company stated its intention to rectify this immediately afterwards, though nothing ever came of it as the flaw had a negligible impact on sales. This led to less respectable, opportunistic racers carrying iron bars in their cockpits to take Behemoths out of the competition with ease. 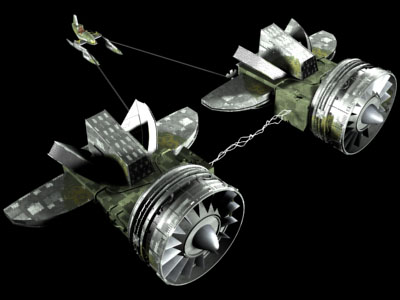