The Eddicus-class planetary shuttle was originally commissioned by a senatorial committee and designed as a land-based counterpart to the highly popular Consular-class space cruiser. Primarily intended to function as a transport for high-ranking diplomats and bureaucrats, the shuttle was named in honor of former Supreme Chancellor Anwis Eddicus to commemorate his efforts to end the Death Seed plague that ravaged the galaxy centuries before. The popularity of the shuttle quickly soared, and it has since become a familiar sight in Coruscant's Senate District as well as the skylines of many planetary capital cities. In part, this is due to the safety and comfort of the passengers being made a top priority by Kuat Systems Engineering, the company responsible for designing and producing the Eddicus.

Although the shuttle's shape is not especially attention grabbing, the senatorial blue color still marks it as a diplomatic craft. In addition to security features such as deflector shields, an observer dome, and anti-surveillance countermeasures, the vehicle is also capable of achieving a relatively high top speed for its size. It likewise featured an above average sensor suite, helping the crew avoid potential troubles while in transit. While these safety features eclipsed those of most other political transports of the time, the shuttle's lack of weaponry made an armed escort a necessity for less secure situations or high-profile passengers.

At the time of production, the features and accessories for the shuttle were of the highest quality available, often superior to the Consular-class cruiser it complemented. With its high cruising altitude, passengers are offered a spectacular view of the sights around the shuttle, be it a sedate ride through the clouds or the sprawling ground landscape below. The Eddicus-class can still be seen today, enabling the wealthy and political elite to demonstrate their stature to the population at large in style, comfort, and security. 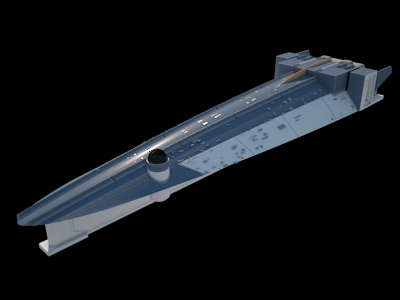