Built within the Maw, an unstable cluster of black holes, the mysterious Maw Research Installation was recently rediscovered following a glitch in the navcomputer of a passing freighter. After its location was made public, many scientific studies were commissioned in attempts to unlock the Installation's secrets and return it to full working order. It has been confirmed that the Installation was built using mechanically hollowed asteroids grouped together and located in a small pocket of stable gravity within a cluster of black holes in the Kessel sector, commonly referred to as the Maw. Due to the crushing gravity, dangerous radiation levels and other life-threatening hazards associated with black holes, solid facts of the Installation's history are few and far between as nothing stationary could survive within The Maw if not located at the Installation's precise position.

From a technical point of view, the Installation can be defined as a work of engineering art. Its location is at the exact coordinates where a gravitational equilibrium is created, with each black hole of the Maw exerting their omnipresent pull in a different direction, thus nullifying any gravitational acceleration. Within this "gravitational island" a number of asteroids survived the persistent pull of the black holes, and perhaps are remnants of larger solid masses torn apart during the creation of the Maw itself. The hollowed-out asteroids that create the foundations of the installation house living quarters, laboratories, garages, assembly bays, meeting halls and other facilities of unidentified use. The asteroid bodies are also connected using dual skinned transit rails and access tubes, allowing quick transport of research materials and personnel around the Installation. The layout of the facilities and machinery found within the station strongly suggest that it was originally intended to be used as a high tech research installation. It is unclear what research was performed here, but given the size and sophistication of the laboratories and manufacturing equipment that remain, it could have been virtually anything a scientific mind could imagine.

Debate rages over who actually constructed the Installation and how the stable gravity pocket was originally discovered. Some unsubstantiated sources claim that this ingenious structure was formerly an Imperial base, that the labs were constructed by engineer droids whose memories were subsequently wiped, and that the crew who built the installation were given a simple choice: serve in the Installation for life, or die. Even mythical stories have now been linked the installation, alluding to ancient and powerful races building the Installation after they themselves created The Maw. As yet, no conclusive records have been found though, nor have any groups come forward with categorical evidence to prove ownership of their long lost station.

After comprehensive searches of the installation by some of the galaxy's top engineers, no defensive weapon systems have been found anywhere on the facility. This has therefore thrown extra confusion into the discussions of who built and used the research station. Theories support that the installation was originally designed for peaceful civilian research of the surrounding black hole clusters, therefore needing no defensive measures. An alternative is that the installation's creators were confident that the complex pathways through the black holes were all the defense they would require in keeping attackers at bay. There is no evidence ruling out the possibility that fighter ships may have been garrisoned within the Research Installation to guard against anyone who managed to find a path through the Maw; however, any wreckage left from the battles would have simply been drawn away and crushed by the nearest black hole, eradicating any sign of historic confrontations. Whatever the reason, the lack of prior knowledge regarding the existence of the Maw Research Installation obviously justifies the absence of any noticeable defense systems. 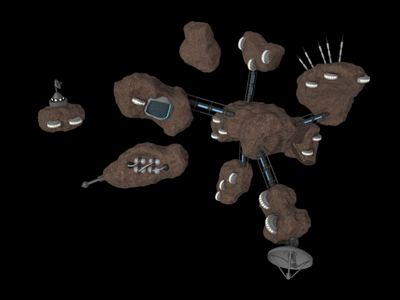