The Ataturk-class Station is an older model of defensive space station still in use today primarily for anti-starfighter defense of larger stations, such as the Golan series which lack dedicated anti-starfighter weaponry and for the defense of more backwater systems. The Ataturk's multiple quad-laser batteries, tractor beams, and missile launchers would make short work of any attacking squadrons. This combination of anti-starfighter weaponry, tough construction, and ability to embark, launch, and control up to three squadrons of its own snubfighters with its dedicated fighter operations center make the Ataturk an ideal system defense platform for Outer Rim planets, where they can expect to face pirate or criminal gangs with limited capital warship capability. The station's multitiered architecture provides excellent fields of fire against rapidly maneuvering targets, allowing multiple sets of quad lasers to engage the same target if required.

In systems that can expect to face more serious threats, however, the Ataturk's lack of heavy weapons means that an attacking warship can sit outside the range of an Ataturk's weapons and break down its shields with a continuous turbolaser barrage. In systems such as these, the Ataturk would need to be deployed as a close defense for heavier defense installations, which can engage the enemy warships while being defended from fighter attack themselves.

More modern versions of these stations have more automation and enough escape pods to swiftly evacuate the whole station's crew in case of emergency. With all these capabilities, it can be expected that Ataturk-class stations will remain a common sight throughout the galaxy for the foreseeable future. 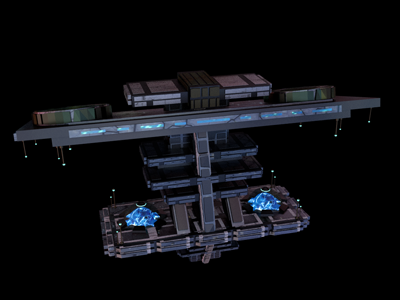