As ship technology advanced further, larger ships became the norm, and with this advancement came the need to recycle larger hulks. However, processing more material led to even more byproducts such as harmful fumes and toxic impurities. Thus, the Recycling II station was designed. Being in space, there was no need for waste treatment facilities, as any harmful byproducts were safely vented to space. The Recycling II station is a notable improvement over its predecessor, with larger bays and more comfortable living spaces.

The distinguishing feature of the Recycling II station is the axial spire. This structure contains the life support systems, habitation, offices, and the main reactor. The reactor is placed neatly in the middle of the spire, both to make it close to the recycling operations and far from the living quarters. Older stations generally used simple bunk room housing arrangements, with up to twenty crew members sharing accommodations. The Recycling II is designed for longer habitation and now includes full suite arrangements with individual living and waste disposal facilities. The offices are equipped with a powerful computer system, which allows data storage and constant monitoring of the recycling operations.

The area where the recycling and processing actually occurs is divided into two levels of bays. The top level bays are much smaller than the level below them, so as to accommodate smaller ships without cluttering the larger holds. The second level bays are considerably larger and designed to process larger hulks and act as storage. This separation of the station into bays allows for multiple recycling operations to occur simultaneously, increasing efficiency. The well-organized design and relatively low cost of the Recycling II station make it a station of choice for salvage and reclamation corporations throughout the galaxy. 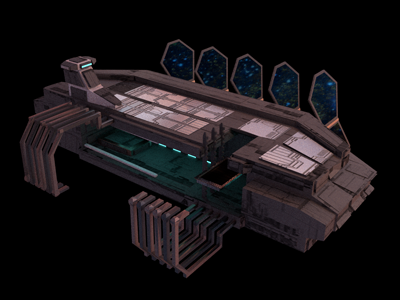