The DP-20 line of gunships are considered to be some of the most popular corvettes in the galaxy. However, the DP-20c is the real jewel in this line. As capital ships throughout the galaxy have continued to grow, corvettes have slowly slipped into obsolescence. There are exceptions to this rule, and this ship is one of them.

The original design had significant limitations when engaged by larger ships. The second generation (the DP-20b) was an attempt to remove some of these limitations, and was partially successful. It was the final design of the DP-20 line, however, that truly earned it a place on modern battlefields. Although the DP-20c is vulnerable to massed fire, they have been grouped together as squadrons and used effectively to perform large scale bombing runs. In large battles, the real advantage of the DP-20c is its size and her speed. The ship is small enough to remain almost unnoticed and allows it to perform sneak attacks. Unfortunately, that tactic has been used enough that experienced commanders have started to target them first just to remove that option.

The real place for this gunship is chasing pirates, patrolling remote sectors, and even convoy security. For these reasons, the ship has become popular with a large number of groups throughout the galaxy. Gunships have also become popular with traveling dignitaries on both sides of the galactic conflict, mostly because of their ability to both take and give punishment. Also, its sub-light speed allows it to flee if necessary. In light of the model-c's high cost, many dignitaries will find the model-b to be a more cost-effective choice of transport. Nevertheless, the DP-20c finds itself firmly planted in the history of the galaxy, and will likely be a common sight for generations to come. 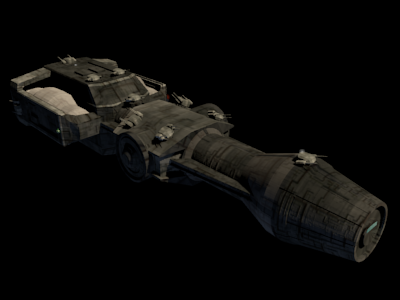