The Z-58-0 droid is an older product of Arakyd Industries who was a major manufacture of droids - especially those with military and security application. The Z-58-0 falls into the latter category, and at the time of its release, was a premiere security model. The need for security is almost always present and the Z-58-0 was designed to be universally versatile. Though production on the Z-58-0 security droid has long since concluded, the marketing and sales of the droid were expertly handled and many units are still operational throughout the galaxy. This is largely due to the capabilities of the Z-58-0.

The main body is comprised of two cylindrical halves with tapered ends that are mated together in the center by a smaller cylinder. Housed within the body are the motivators, repulsor unit, batteries, computer core, and data processing unit. On the top half of the body are three ocular receptors. One is a photoreceptor and the other two are sensors. Attached to the rear of the body are four maneuvering flaps which angle forward. The flaps also aid in transmission and reception of signals. The droid is able to move about by using its repulsor unit to hover over the ground. This ability mitigates most terrain concerns and also means the Z-58-0 can be employed swiftly and at various altitudes. Z-58-0 units are also equipped with light armaments and shields. 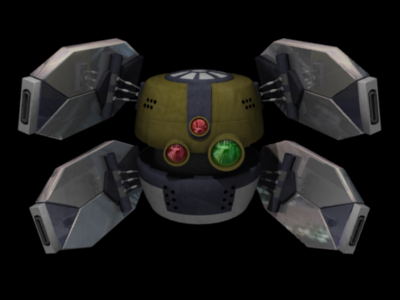