Nova Crystals are an alternative currency developed by the Krath to be used in place of Galactic Standard Credits. As a result of their faction backing, Nova Crystals have seen widespread use and have become the second most used currency in the galaxy. While originally intended to act as a form of government debt, the crystals developed into a full-fledged currency and have come to act as a barometer of the Krath economy. This has resulted in a financial market for Nova Crystals, where traders, institutional investors and governments purchase and sell the crystals based on the actual and expected performance of the Krath.

The creator of the Nova Crystal designed the crystals from the volatile and explosive nova material, with the exact details of the creation process only known to a select few Krath jewellers on the planet of Kel Shebbol. The process starts with a specialised machine that compresses nova into small fragments, rendering the nova atoms inert. The Nova Crystal is then inspected by highly trained quality professionals to determine if the crystal meets the standard for use as currency, or if it should be re-purposed into jewellery. Once a Nova Crystal passes inspection for use as currency, it is moved off to be marked with special engravings with its serial number and currency mark.

While most Nova Crystals are secured in large vaults, Celebratory Nova Crystals have also been minted and are in possession of their purchasers. These commemorative issues of Nova Crystals honour anniversaries of historical events or important current events. While these issues are still legal tender, they tend to act as collectables and are generally reserved for close affiliates of the Krath. 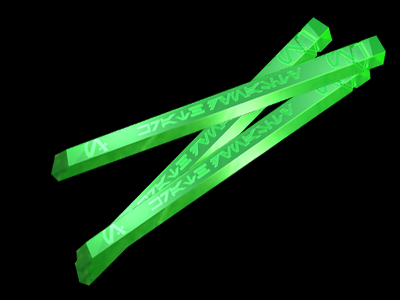