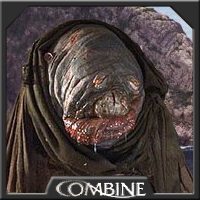 The Baragwin people were a species of bipedal reptilians. They were easily recognized by their hunched backs, wrinkled skin, and large heads mounted on thick necks. Though their population numbered only in the millions, they were widespread throughout the galaxy, having been part of galactic society for millennia. Their original homeworld was lost to legend. Instead, like Humans, they identified themselves with their native planet.

Baragwin culture, since it did not derive from a single homeworld, was highly dependent on a Baragwin's planet of origin (with Tatooinian Baragwins behaving quite differently from those from Denhui-Eight.) Baragwins generally had little prejudice, treating all other beings equally regardless of species, culture, or planetary origins (though criminal Baragwins would exploit all beings equally instead). Baragwin settlements were generally small and anarchic, with short-term leaders selected by informal democratic processes.

Physically, Baragwins were noted for their thick skin which could resist most physical attacks, and their shuffling gait. This made them powerful, but slow, warriors. Baragwins also had an acute sense of smell, sensitive enough to detect a person's mood. This led some of them into careers as big-game hunters, or even as bounty hunters.

Baragwins were also famous as skilled weaponsmiths. During the Jedi Civil War, Baragwin-made blasters and vibroblades were among the most powerful personal weapons in the galaxy.