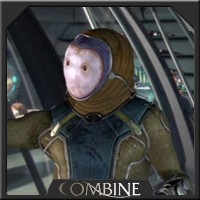 The Polis Massan are a faceless race of xenobiologists who migrated to the Polis Massa asteroids in search of archeological remains of the Eellayin whose homeworld was destroyed in some cataclysm which created the asteroids. Little is known of their actual homeworld other than they too come from Subterrel sector, the same area of space that contains their asteroid home. With time they became so associated with the asteroid remains that they became known as: The people of Polis Massan.

Polis Massans are short, thin beings with a flattened and pale face. They have grey hands each with four long, dexterous fingers. Polis Massans are mute and thus use sign language or machines to make their intentions known. Over the centuries, Polis Massans have developed a mildly telepathic brains and deep-focus eyes, due to many of them being miners, medics, or exobiologists. These beings have osmotic membrane faces and growth-rings circling their wiry bodies.

They are very fascinated by other alien species but they retain themselves from interaction with them. Their xenobiological records of the different cultures are believed to contain more information than the libraries at the core worlds, and that is a feat if we consider how rare their open contact with other cultures is.

In one of the rare dealings with outsiders the Polis Massans made contact with the Kaminoans, exchanging some of their xenobiological data for cloning technology. The Polis Massans have adapted this cloning technology for their needs, using it in hopes of reconstructing biological matter they find in their archeological digs. Needless to say, this technology has become very useful in their research of the past.