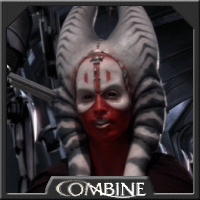 Togrutas are a humanoid species native to the temperate planet Shili, positioned in the expansion region of the galaxy. All Togruta have colorful markings on their skin, a genetic trait left over from their predatory ancestors. Long, striped, curved, hollow horns spiral upward from their skull, and three darker striped head-tails drape downward, two to the front, falling over their chest, and one thicker one located in back, beginning at the base of their skull. A Togruta's skin is deep red, and their dark eyes and gray lips are embellished by the white markings that adorn their face. Vertical red and white stripes run down their chest and back, all the way to their toes, thus allowing them to blend into the thigh-high turu-grass that Shili is covered in. While hunting, their montrals aid them by providing echolocation abilities and a finely-tuned spatial sense, allowing them to encircle their herbivore prey.

Togrutas are a peaceful, quiet people who are fierce in combat. Loyal to a cause and happy in larger groups, they work well with others and easily fit into teams of mixed cultures. Most do not like to be alone, however, and will tend to follow members of their group around for companionship.

Outsiders unfamiliar with them might mistake Togrutas as being venomous, as they possess prominent incisors that give the impression of a venom-injecting snake. Sociologists believe this mistaken thought results from the fact that Togrutas prefer to eat small, live prey, and when others watching see the animal quietly go through its death throws it is mistaken for venom-induced spasms. It has become common knowledge, though, that Togrutas are not venomous.

The Togruta are a people who pay a great deal of attention to detail, making them excellent and incredibly efficient engineers. They handcraft almost everything produced on their homeworld and keep with their traditions of near-perfection as a result of personal inspection of each and every item produced.