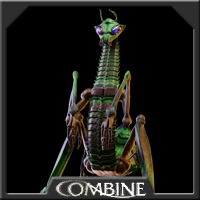 The Vratix are a race native to the planet Thyferra and are noted to have perfected the creation of bacta by combining alazhi and kavam. They vastly outnumber the human natives of the planet, but are considered inferior to their corporate counterparts. The Vratix are humanoid insects. They have large, compound eyes, a stalk-like neck, and three pairs of limbs sprouting from a cylindrical thorax and abdomen. The upper set of limbs acts as triple-jointed arms, while the lower two serve as legs. The last set of limbs is well-muscled, and is used in jumping. Most Vratix are grey in colour, with the shades darkening with age.

They have a basic form of hive mentality, but are able to function as individuals. They believe that sight and sound are not permanent things, and prefer to touch another being in order to recognize their presence. The Vratix on Thyferra govern themselves through the Ashern Circle. However, the strong pro-human elements found on Thyferra have labelled the Ashern as terrorists. Although the Ashern are widely considered responsible for the contamination of certain batches of bacta, this may only be a ruse to cover up an internal struggle within the corporations on the planet.

Vratix is also the name given to the native language of the Vratix. It consists of a series of clicks and high-pitched sounds, which are augmented by changes in skin colour. Because of this combination, no written form of the Vratix language has been created and while non-Vratix can learn to understand the language, they are unable to recreate the nuances required to speak it.