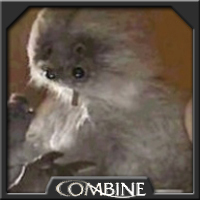 The Talz are a culturally and technologically primitive species native to the frigid world of Alzoc III in the Outer Rim system of Alzoc. They stand an average of 2 meters tall and are completely covered in thick, shaggy white fur, with sharp talons capping oversized hands. The only obvious feature of their furry faces is their four black eyes, but it also holds a proboscis through which they speak their buzzing native language and feed. They are gently, kindhearted beings who are slow to anger.

The four eyes of the Talz are perhaps his or her most remarkable feature. One pair is adapted to see clearly in light so blinding that it might burn the corneas of most other beings, while the other pair can see in near total darkness. The end result is that Talz can see in virtually any lighting conditions and are not blinded by bright flashes.

Most Talz are unaware that a vast galactic civilization exists beyond their world. Imperial scouts discovered them as the New Order was putting a final end to the Republic. The Empire recognized that they had discovered a ready-made slave labor force to extract the mineral wealth of Alzoc III. But all the Talz know is that one day, rocks fell from the sky, and out of these rocks stepped strange beings who forced them to give up their normal routines to make caves. The Talz live in the hope that the strange beings will leave someday so that life can return to normal.

Due to the timing of the world's discovery, the New Order did not log the existence of the Talz, not wanting to be burdened by the Senate regulations relating to the treatment and handling of primitive sentients. Even after the Empire was firmly entrenched, they kept the mines on Alzoc III and the enslaved Talz a secret. As such, the Talz are very rarely encountered anywhere but Alzoc III, and those who do show up elsewhere tend to be in the service of Imperial officials. A few Talz have fled their homeworld and escaped Imperial custody through a variety of means, but those who stray too far from loosely controlled systems on the far fringes of the Outer Rim tend to be captured and sent back to their homeworld.

Most Talz professionals are thugs, although their gentle nature tends to cause them to refrain from actively bullying others. Talz heroes are almost exclusively fringers; once introduced to the concept of high technology, they often take to it well.

Usually, only the rare Talz encountered off Alzoc III will understand Basic, but his proboscis makes it impossible for him to speak it. Although protocol droids are not typically programmed with the Talz language, it is possible to program one with the ability to translate it.