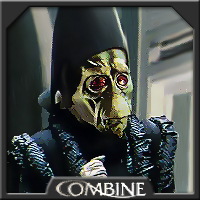 If there's money to be had, a Neimoidian will be nearby. So says a common spacer stereotype, justified by the species' reputation for excelling at business.

This race of aliens resembles the Duros in many physical respects, having descended from pure Duros stock when a group of colonists settled on Neimoidia some 25,000 years ago. They have smooth, greenish skin and large, red eyes, although the Neimoidian eye has a pupil which splits it horizontally. They also have a more developed cranium, which is studded with small knobs and bumps. Their mouths are down-turned, giving them a perpetual frown.

The Neimoidian life-cycle has contributed much to their cutthroat business acumen; they live in communal hives from the time of their birth to the age of seven. In those seven years of grub-hood they are given limited access to food sources. The grubs then compete for food, and many young die if they are too weak to fend for themselves. This helps weed out the weak individuals at a very early age, as those grubs which can't find food or steal it quickly die. This method of raising their young instills tremendous greed into the young Neimoidians, but it also forces them to become organizational.

Since most able Neimoidians left their homeworld in search of a better life, the general population of Neimoidia was made up of the weakest of the Neimoidian people. In general, the Neimoidians are entrepreneurial, but are also lazy cowards. They have developed one of the most advanced droid technologies in the galaxy, and use automatons for everything. They developed droid chairs, droid starships, and entire droid armies. They are also very conscious of rank and position, and use all methods of clothing to describe their status. Elaborate headdresses; the cut, color, and texture of the cloth; and the collars and trim of their clothing all have specific indications of rank and position.

Though they call Neimoidia home, Neimoidians can trace their ancestry to the ancient Duros spacefaring culture. The two species share a striking similarity in appearance, but their personalities could not be more distant. While the Duros are a gregarious, expressive and adventurous lot, the Neimoidians seal themselves away from others, preferring to let droids do their talking. Neimoidians place great value on wealth, and dress to display their riches accordingly. High-ranking officials dress in ornate and lavish gowns, towering headpieces, and the elite even travel about in inconvenient yet expensive conveyances called mechno-chairs.

Neimoidians spoke either heavily-accented Basic, or a distinct non-verbal form of communication referred to as Pak Pak. Pak Pak was comprised mostly of guttural grunts and croaks, and non-Neimoidians found it rather difficult to comprehend. Many low-level worker drones were kept malnourished so as to never reach full mental maturity. Combined with the planet's natural unpleasantness, it was usual for Neimoidians to choose not to return home unless absolutely necessary. 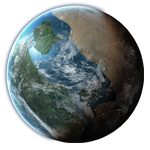