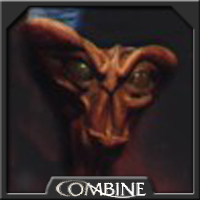 The Arcona are scaleless reptiles, ranging between 1.7 to 2 meters tall. They are bipedal and humanoid in nature, with three toes on each foot and two fingers and one thumb on each hand, all with talons approximately 3 to 4 inches in length. They have triangular heads, large glittering eyes, and the nose and mouth are merely three barely visible slits in the face.

The planet Cona, their homeworld, is a hot, dense world orbiting the blue giant Teke Ro. Cona has no axial tilt, and it has no seasons, as its orbit about Teke Ro is a near perfect circle. The atmosphere of Cona is rich in nitrogen and hydrogen, but most of the world's oxygen is trapped in the ground. The air here contains large quantities of ammonia vapour, and free running water is extremely rare. The flora on Cona has evolved to survive on ammonia vapor, which it uses to create acids to break down the bedrock and free the trapped oxygen below. These plants then break down the ammonia into hydrogen and nitrogen, and capture the oxygen from the ground. They use hydrogen and oxygen to make water.

Because everything they eat contains ammonia, the Arcona have developed a tolerance for it, and also require ammonia to create enzymes necessary for their very survival. The Arcona use ammonia particularly to supplement their circulatory systems and eliminate waste, disperse body heat and carry nutrients to their thick hides. In spite of this, the Arcona still have a dependency on water. They use their clawed hands and feet to dig up the plants and harvest water.

Another interesting feature about the Arcona is the bulbous growth between their eyes, which looks similar to a nose. In fact, this is not an olfactory organ at all, but an acutely accurate heat sensing organ, useful in sensing and locating another creature, and as such, an excellent supplement to their weak eyes. The eyes of the Arcona are multi-faceted, much like an insect or spider. Each facet is designed to perceive a different colour or shade, and will alert the Arcona to slightest of movements. But, they have no ability to see three dimensions. Because of this weakness, the Arcona only see the world around them as an imperceptible blur of motion and colour. They must rely on their heat perception and other senses to bring their lives into an understandable focus. The Arcona places greater emphasis on the rights of the group than the rights of the individual. However, there are a few acceptable variations. The best example of this is an Arconan's devotion to its offspring, placing far greater importance in it's own than the offspring of others in its own clan.

The Arcona reside in loose communities composed of several family nests. This society arose because of the need to protect the young from danger, for Cona is a dangerous place for the immature or uninitiated. Arcona parents must spend much of their time protecting their young from the jungles of Cona, or the hatchlings could trigger a spine trap, drink poison, or be eaten by carnivorous plants. Because of the long-term commitment involved in raising a nest of hatchlings, Arcona do not enter into the bond lightly. Males are generally the more finicky of the two genders, and when bonded, Arcona will bond for life. The hierarchy of the group is such - A community is usually built within 20 kilometers from a clearing. Every 20 days, all adult Arcona meet there and discuss community business. These meetings are led by the Nest Leader, a male who is chosen by popular vote and can be replaced at any time.

Although they possessed a pre-industrial technology level before their world was discovered, the Arcona have since been completely acclimated into the general galactic populace successfully. They have established colonies on civilized and primitive planets, and, nowadays it is generally easy to find lots of Arcona in busy spaceports across the galaxy. The only negative side effect of the Arcona's entry into the galaxy is that they were soon introduced to sodium chloride, or salt, which produces a hallucinatory high in their optic nerves, but also destroys their ammonia pancreas, which produces a water saving enzyme. An Arcona who is addicted to the salt high is easily identified by the fact that his or her eyes have changed from green to gold. The Arconan government has since banded together to ban the import and sale of salt on Cona from off-world, but it is still far cheaper to import a few hundred grams of salt than it is to import a few hundred gallons of water.