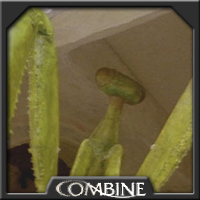 The Yam'rii are a group of large, mantis-like alien creatures that inhabit the planet Yamr. Though their appearance may look non-threatening, the Yam'rii posses an incredible amount of strength. Their exoskeletons provide them with a great amount of protection from Yamr's harsh climate. Even though the planet is near inhabitable to most races, the Yam'rii have constructed a large industrialized society, basing most of their economy on technology.

The twin eyes located on each side of the Yam'riis heads allow them with an incredible sense of sight. This ability for great detail allows them to be excellent mechanics. The normal Yam'rii grows to be around two meters tall, though their bodies remain relatively slim all their lives. The Yam'rii are known for their great stealth methods, which is impressive for their large size.

Yam'rii attitudes are not much different from other species in the universe. Much like the Wookiee race, Yam'rii are quick to anger and have been known to go on large frenzies fuelled by their anger. They are meat-eaters by nature, and thus have been developing their hunting methods on Yamr since they were young. Eggs are also a supreme delicacy for the Yam'rii race.