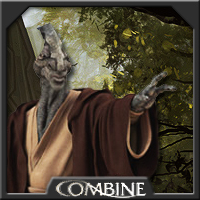 The Vurk are a tall, reptilian humanoid species from the planet Sembla. Their most predominant feature is the large, sweeping crest proudly displayed on the back of their heads. Many non-Vurk have often wondered the use of the horn, but the Vurk usually aren't keen on giving away that information. The most widely accepted hypothesis is that it was used by their amphibian ancestors to attract mates. Some even rumor that it holds true with the Vurks, but it is impossible to say for certain.

Vurks have 3 fingered hands and feet; large, almost bulbous, dark eyes; and leathery skin, usually found in shades of grey or green. They are also capable of breathing underwater, another gift from their amphibian ancestors. Males usually have an average height of 2.1 meters, with females coming in at 1.9 meters; they live for about 70 years, on average.

As a whole, the Vurk are a very nomadic species; as such, few sizable population centers ever appeared on Sembla. Due to this, many sentients throughout the Galaxy consider the Vurk to be a relatively primitive species. However, Vurks are typically very intelligent, having developed a strong philosophy based on personal integrity and individual freedom, with honesty being a highly valued trait among them. Honoring this philosophy, many Vurk among the galaxy turned towards more peaceful and diplomatic pursuits. Despite their calm nature, they were known to be very apt at defending themselves.