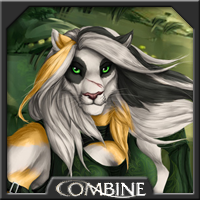 The Togorians are a race of large, bipedal felines, well known for their abilities in combat. They have razor like claws on their paws and feet, aiding them in melee combat and giving them the ability to shred their prey. Their fur color ranges from black to a lighter gray and they sport a wide variety of spots and stripes. Their bones are extremely dense as well, allowing them to sustain heavy damage and survive often without broken bones or major trauma.

These sentients are widely renowned for their impeccable honor, which is believed to have helped harbor good relations with the Mandalorians. Historically the Togorians were seen fighting side by side with their armor clad brethren, and are regarded as a formidable force on the battle field.

The Togorians are naturally good hunters, typically pursuing the etelo and bist as a source of food on their home planet, Togoria. In addition to being accomplished hunters, they regularly evaded contact with the larger liphons, a flying reptilian predator. As they evolved they developed a symbiont relationship with another reptilian species, the mosgoths, who were also hunted by the liphons. This would lead to a mutual relationship with many Togorians residing near the nests of the mosgoths, and they eventually bred and trained the reptilian creatures as mounts.

The tendency to hunt and keen interest in weapons have contributed to the Togorian's talent in weapon making. Their weapon of choice is the Sc'rath, a hand held blade usually adorned with detailed inscriptions and symbols. Many Togorians have left their home world and made quite a name for themselves as blacksmiths around the galaxy. Their insistence on high quality material and attention to detail allow them to create melee weapons that some regard as works of art.

Over time, a peculiar social trait has developed, driving a wedge between the male and females of this species. The males have always been fond of their nomadic ways as hunters and despise settling down. The females, however, have made more permanent settlements where they raise their young. This unique development has led to the males spending the majority of their lives away from their family, typically residing with them for only a month or two each year.

Despite this strange arrangement, the males always keep close communication through scouts with their families, providing ample defense and aid when required. The females, meanwhile, are rather curious and diligent towards manufacturing and understanding various kinds of technology. This aided them in making the Togorian race prosperous by bartering for other technologies and goods on an interplanetary scale.

Read The Holocron Article
« Back To Top