Due to the advent of blaster technology, projectile weapons have become more and more uncommon and obsolete in the galaxy. However, the C-M Frag Storm Heavy Shotgun, often shortened to the C-M Shotgun or Frag Storm, continues to be an extremely popular firearm. Unlike blasters, the C-M Shotgun is a slugthrower, firing solid kinetic projectiles known as slugs, hence the name. While many forms of body armour protect against energy blasts, these armours do very little to counter ballistic threats.

The Frag Storm focuses on stopping power rather than rate of fire. The C-M Shotgun is fitted with twin barrels, which can be fired either independently or simultaneously. The barrels are reloaded with a break-action system, in which the weapon is opened and new slugs are loaded directly into the breech of each barrel. To counteract the recoil of the Frag Storm’s powerful discharge, the weapon is very heavy for its size. In addition, the user is required to carry physical ammunition; something that can prove to be very cumbersome.

The combination of the Frag Storm’s devastating power and ease of manufacture for even primitive cultures has caused it to become popular among those with a predisposition for close combat. The Frag Storm can be found in large numbers on both sides of the law, especially among those who are not renowned marksmen. The slugthrower’s projectiles quickly lose velocity even at medium ranges; as such, the C-M Shotgun is most often utilized as either a defensive backup weapon or as a primary offensive weapon for boarding actions and close-quarters battle. 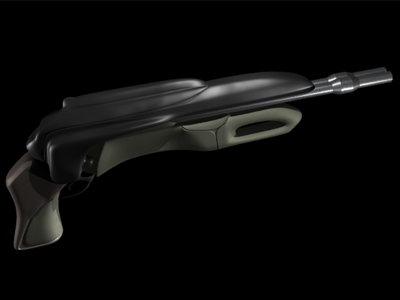