Lightsabers were first developed by the Jedi in an attempt to turn traditional ceremonial swords of the order into more powerful weapons using advanced technology of the age. The first models were successful in "freezing" a laser beam, by focusing a beam of energy circumferentially back to the source. They were, however, highly unstable, using astonishing amounts of power which caused them to overheat after a few minutes, and were seldom used. Over time, these faults were corrected in the form of protosabers. While protosabers were combat-capable, they required wielders to carry heavy belt-mounted power packs to meet the weapon's high energy requirement. To add insult to injury, the cable connecting the power source to the hilt of the sabre also restricted manoeuvrability, further limiting the weapon's capabilities.

It was the Sith Empire that provided the next major genesis by introducing an integrated power cell that transformed the cumbersome protosaber into an efficient, graceful and powerful weapon: the modern lightsaber. The lightsaber revolutionized Force users' combat strategies through the use of Force-powered attacks and telekinetic control. Following its success with the Sith, the design was quickly adopted throughout the Jedi Order and the majority of protosabers were upgraded with the new technology. The lightsaber soon became a weapon of both respect and fear, and an icon to the galaxy.

A typical lightsaber consists of a power cell, at least one crystal, multiple focusing lenses, and blade emitter all contained within a hilt customized to the owner's grip and style. The colour, length, and quality of the blade are determined by the combination of these materials. Due to the unique nature of each lightsaber, lightsaber construction can often take months while the necessary gems and parts are gathered to cater to its user's needs.

One of the prominent variations of the lightsaber is the double bladed lightsaber. This specialised lightsaber consists of a single, elongated hilt emitting a blade at each end. This design offered the user a much higher rate of attack with minimum movement. It also gave its user an advantage when deflecting and parrying due to the second blade doubling the weapon's surface area. The weapon's dual blades would pose a problem for most combatants who would try to track them separately rather than treat it as a single weapon.

However, there are a number of problems associated with double bladed lightsabers that may put their users at a disadvantage. The presence of a second blade forced the user to hold the weapon either horizontally or diagonally which severely limited the attacking and parrying abilities of its user and caused a large number of standard lightsaber manoeuvres to become nearly impossible to execute. Most techniques require elaborate movements to execute leaving the wielder's body open to attack. To add insult to injury, the elongated hilt provides enemies with a large target that is difficult to defend; the blades are sometimes sliced in two during lightsaber combat.

While some lightsabers are known to be outside Jedi and Sith hands, it is very uncommon for them to be used in combat. Focus, control and strength are required to wield a lightsaber; the weightless plasma contained within the lightsaber generates a gyroscopic effect, making the blade difficult to control. This gyroscopic effect is even more prominent in double bladed lightsabers and it is not uncommon for untrained users to accidentally injure themselves with the weapon, often fatally. 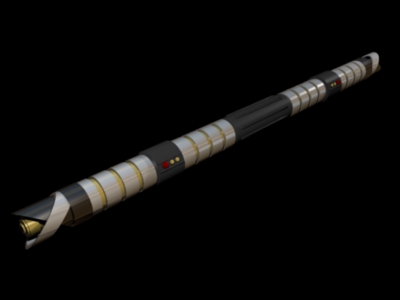