The Destroyer Droid, as it is most commonly known, was first designed due to the mass-displeasure received surrounding the restricted functions of combat droids preceding the Droideka - the name given to the droid by its original designers.

These droids are very mobile due to their ability to set themselves into a wheel-like configuration, contrasting other droids, allowing them to roll at far greater speeds than their normal pace. This design feature also allows the droid to be easily transported - offering more efficiency in the use of space than other droids; the volume of the droid in its wheel-like configuration is much smaller than when fully deployed. Allowing rapid insertion into battle because of their dynamic shape, the Destroyer Droid can easily transform, making itself into the tripodal image feared throughout the galaxy by those who have witnessed these droids in action.

Armoured in bronzium alloy, these droids can withstand harsh punishment even before the installed personal shield generator is taken into account. This shield can deflect or absorb many blaster bolts simultaneously over an extended period of time, as well as deflecting lightsabre blades, lightwhip attacks, or other physical and melee weapons. This allows the droid a huge combat advantage against typical infantry while the shield is up, although it remains vulnerable to light artillery or similarly powerful weapons, and also when in its faster wheel-mode. In order to fulfil its purpose --the annihilation of all enemies--, the Destroyer Droid is equipped with arm-mounted twin blaster cannons, as used by many atmospheric vehicles. These have a formidable rate of fire which few opponents can hope to stand against for long, and which will very rarely miss, due to the addition of radiation sensors to the droid's basic sensor suite rather than the more typical droid photoreceptors, allowing for less error in bad light conditions, giving an even more significant advantage over living opponents and lesser combat droids.

The design of these droids is unique; their menacing, insectoid appearance manages to be both very compact, efficient and using very little material yet is terrifying to opponents and resilient to attacks. Some have criticised the design of the droid for not allowing its cannons to fire while in its travelling form and that if an opponent were to come close to the Destroyer Droid, it would be incapable of hitting the opponent due to the way its arms are spread apart. They are also not very mobile in their combat mode, having a very slow movement speed, giving greater chance for the escape of the enemy, and incapability to ascend stairs. In addition, whilst in combat against those who are force sensitive, the droid can be vulnerable despite the fact its shield can withstand a lightsabre, due to its inability to stop force-based attacks. 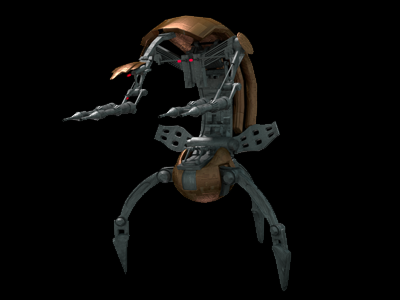