Designed well before the advent of advanced gyroscopic sensors, its quadrupedal design ensured it stayed upright on a wide variety of terrains. When fully activated, the ISO-5R stood a full two metres tall, just like the Outer Rim beasts of burden that the designers drew their inspiration from. The droid was among the first military droids to have a collapsible design, allowing multiple droids to be stored and transported in the cargo hold of even modest sized freighters. This complexity, however, ultimately made the model too difficult to mass produce in unsophisticated Outer Rim factories, resulting in the Hutts fielding fewer of the droids than originally expected.

The original ISO-5R schematics called for five blasters: one light blaster on each side of the droid's head, two light swivel blasters on the droid's rear and one front-facing medium blaster on the droid's undercarriage. The high cost of production resulted in a need for simplified plans, leaving the ISO-5R with only two head-mounted light blasters. As a result, some early examples had dummy blasters in place of the removed components. To compensate for the diminished armament, an impressive sensor package was included in the final design.

While some examples can be found today serving in their original military role, others have been reprogrammed by civilians for other purposes. As models such as the ISO-5R pass from being simply outdated to being antiques, demand for these droids has increased. Because of their desirability by collectors, they may now be found in markets across the galaxy. 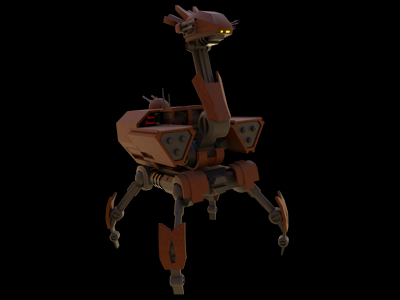