Originally developed as a repair droid by the Iridonian Rabnet Corporation, the Buzz droid's initial history was fraught with controversy. While the droid was still in the initial testing stages, Rabnet's auditors reported a number of financial discrepancies and, after an investigation by the Galactic Republic, bankruptcy procedures were initiated. During Rabnet's liquidation process, the company's creditors sold the droid's design to the Colicoid Nest Collective, the main subcontractor during the Buzz Droid's design phase. The design was quickly militarised and, even more swiftly, banned by the Galactic Republic Senate. While this ban was ostensibly due to the military nature of the droid, it was a political move due to the Colicoid Nest Collective's tendency to work with any buyer, even those who opposed the Republic. With the First Galactic Civil War in full swing at the time of this decision, this had the unintended effect of forcing the Collective to begin supplying the Republic's adversaries, ironically initiating the very event the ban was meant to circumvent.

The Buzz droid's design was simple, being based on pisto, pests native to Colla IV. Initial military doctrine called for the droids to partially bury themselves underground, wait until enemy combatants passed their location, and then ambush and swarm any infantry and light military vehicles in the area. The droids would then use flechettes to latch onto the targets and proceed to use their dual buzz saws to tear their enemies apart. As a result, the Buzz droid only had the most basic sensors installed, while rudimentary ECMs were included to prevent detection. The droids' role was later expanded into an anti-starfighter weapon. Loaded onto custom missiles that would be fired upon enemy targets, the Buzz droids would latch themselves onto the crafts and proceed to dismantle them. Programmed with little regard for self-preservation, the droids would continue on their course of destruction, chattering in apparent digital glee, until they were destroyed or all targets eliminated, making them among the most dangerous adversaries one could face on a battlefield.

Despite being decommissioned following the conclusion of the First Galactic Civil War, the swarm tactics employed by the Buzz droids' users meant that they would regularly be left behind after the conclusion of a battle, leading to numerous droids falling into private hands. Today, the droid can be found in museums, private collections and among planetary defence forces across the galaxy, a far cry from their initial battlefield roles. 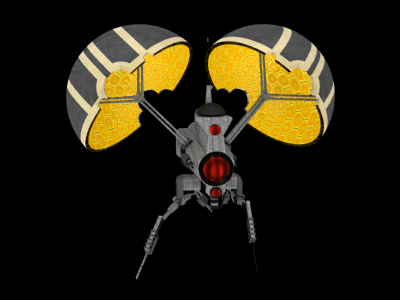