Originally conceived as the MerenData K-X12 Probe Droid, this terrestrial probe droid was designed to mimic arachnid predators common to many worlds. The design has been adapted in many ways throughout the centuries, but the standard model has a cylindrical body that stands one meter tall. The K-X12 sports one large and three smaller red photoreceptors which are able to spy from a distance, magnify nearby items, and see a wide spectrum of frequencies. It moves on three multi-jointed appendages which end in claw graspers.

The K-X probe is armed with a single ventral blaster. Although the manufacturer claimed the blaster was intended for removing debris, its firepower, combined with the probe's agile mobility, lends itself to more militant purposes. The chassis was found to be easily reconfigured for bacta injectors, flamethrowers, ion blasters, or other alternative components. Several variants were created including security, medical, hunting, torture, and labor designs. Later programming upgrades added espionage to the list of roles available to the droid. Despite being an extremely old and out-dated design, the quality and simplicity of the K-X12 has blessed these droids with amazing longevity and many can still be found in fully operational order. 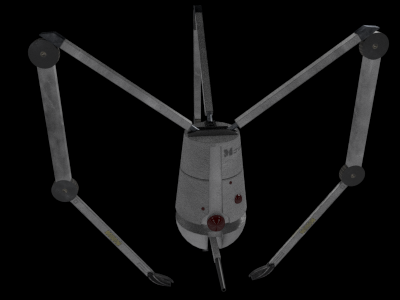