The Mark I Assault droid is designed primarily for military and security use. Vaguely humanoid in appearance, with three limbs, it is unclear who created the Mark I but the design is considered rather antiquated.

The Mark I has two arms and a dual-segmented leg equipped with a stable foot pad. The third appendage's design allows the droid to lower itself to the ground during combat, which gives it a smaller profile and adds stability for targeting versus its patrol position. The speed with which Mark I droids can move by hopping on their single leg is frequently underestimated, however they are hindered by terrain conditions, more so than bipedal droids, and they are also much less covert during periods of movement than droids having other methods of locomotion.

Despite being basic, the Mark I's combat and targeting programming adequately equips the droid for use in modern combat. Two light blasters, one on each arm, are its primary weapon systems. During combat, the droid can rotate its elbow joint until the backward facing blasters are brought to bear on the target. If the target moves close enough to the droid it can also use its appendages as clubs.

Though not capable of the intelligent thinking and instincts of an actual soldier, the Mark I Assault Droid is a useful alternative for basic security, especially when there are no personnel to spare. The Mark I is widely available on the public market and often employed by wealthy individuals, pirates, governments and some armies. 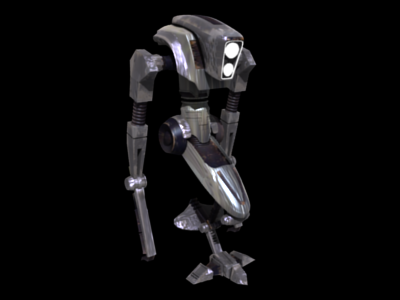