The D'oemir bear is a carnivorous mammal native to the Jhunia snow plains found on the world of Neftali in the Socorro system. They are large, heavily built creatures with stocky paws and an elongated snout. The D'oemir bear is also an example of a sexually dimorphic creature, with the males reaching two meters in height and five hundred kilograms in weight, while the females are usually found to be half the size. Each of their paws have broad, sharp claws, which are deeply concave on the underside. This concave nature is thought to have evolved from the bears need to dig through hard ice when they wish to create a den or to give them access to marine prey while over oceanic ice sheets. It also gives them extra grip while moving through snow and over ice. Much like many other creatures adapted to cold conditions, the D'oemir bear has a deep layer of blubber under their equally thick hide and fur. This allows them to survive in relatively extreme temperatures of cold compared to most mammals and the blubber even allows them to go for extended periods of time without nourishment, living off the large amount of fat stored in their bodies.

As a predator, the D'oemir bear is adept at stalking and will often patiently track down its prey until they become exhausted and can no longer defend themselves. The D'oemir will attack using its claws to rend and maul, often clinging on to larger prey with their front claws and rending with their rear claws. They rarely use their teeth for fighting, instead saving them for the final and fatal attack to finish off their prey. Prior to the colonisation of Neftali the D'oemir had no natural predators and there was very little on the planet they could not hunt or kill. A single D'oemir bear is quite cable of overcoming a pack of the vicious Jexxels, the closest the D'oemir has to competition on the planet of Neftali. They are also strong swimmers and and their tolerance to cold allows them to swim and dive in the freezing water where they have been seen hunting marine animals, hooking the larger ones with their claws and dragging them onto land.

The D'oemir is typically a solitary animal, usually gathering together only for mating or the raising of young, which can take between 2 and 3 years. During these early years, D'oemir cubs are effectively helpless and completely dependent on their mother. This causes the mother to be extremely hostile and territorial to anything that she perceives as a threat to her cubs and will defend them ferociously. Towards the end of their rearing the mother will show her cubs how to hunt prey and survive in an arctic wilderness and the cubs learn with alacrity. When the cubs reach adolescence, they will leave the safety of their mothers protection of their own accord and begin their solitary lives. On the few occasions that D'oemirs do socialise they are often affectionate and playful towards each and have even been known to sleep in an embrace. Displays of territorial behavior towards other creatures are not likely to occur unless they feel physically or instinctively threatened, and the few fights that do occur between D'oemir bears are brutal, resulting in broken claws and deep wounds, which are often fatal to the loser.

Were the environment and infighting their only enemy, the D'oemir population would be easily sustainable. However, after the colonisation of Neftali they found themselves no longer at the top of the food chain, and the number of D'oemir bears dropped dramatically as they were hunted to near-extinction. Their meat is considered a delicacy to many sentients, while their furs are often used in luxury clothing. The hunting of D'oemir bears became regulated due to their low numbers, however because of Neftali's attraction to smugglers and other unsavory characters the bears are still killed by unlicensed hunters and the D'oemir's continued existence remains under threat. Adult D'oemir bears are impossible to domesticate due to their ferocity, however young cubs have been known to be brought up in captivity and often remarked to be a bright, affectionate and loyal companion. Nevertheless, should they be mistreated or neglected, they can become very distressed and extremely dangerous, often leading to death amongst careless D'oemir owners. 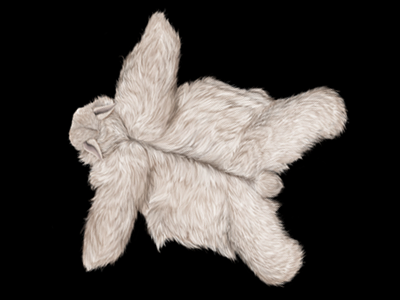