Designed to aid with the birth and early care of newborns, the Chroon-Tan (or EW-3 Midwife, depending on where its operations were based) is a medical droid rumored as being originally produced on Polis Massa. Its presence is meant to be as non-disruptive as possible to both mother and child and it was designed using bulbous modules and personifying features in an attempt to appear both soothing and maternal—a characteristic common among other medical droids in circulation.

The main hub of the Chroon-Tan is kept stable by an anti-gravity repulsorlift contained in its chassis. It is sheathed in a warming pad and soft blankets, and contains reservoirs of both necessary fluids and food. These features are most important in the early hours of a child's life, as the mother may be too exhausted or endangered to provide the same care herself. The droid's limbs, on the other hand, are used both during delivery and through early to late infancy, with scooped paddles that allow them to manipulate the child without causing undue harm or discomfort. Once birthed, the child can be held by the droid in a manner that simulating a parent's grasp.

Throughout the droid's involvement in childrearing, an intricate array of sensors allows for constant monitoring of all patients' relevant vitals. The colored photo-receptors on its 'face' double as a colorful distraction from any child's fears.

Despite humble origins that blossomed into galaxy-wide use, the model has become a rarity. While still able to perform its duties exceptionally well, and with minimal risk to its patients, newer droids have become more multi-purpose and midwife capabilities are now little more than an upgrade package away, which has left the Chroon-Tan B-Machine to become a highly functional curio. 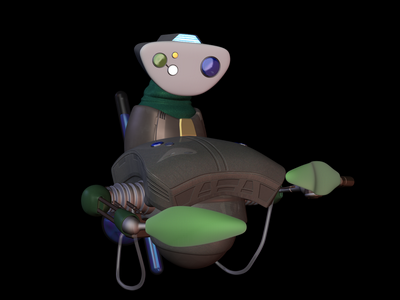