A solid looking vessel, the DX-9 dropship was in use even before the formation of the Galactic Empire and continues even today. Originally created to ferry small groups of combat personnel to the ground from orbit, it’s equipped with heavy lasers and Ion cannons to ward off enemy forces and ensure safe passage for itself clear to the drop zone. Able to carry twenty (20) passengers along with its crew of five (5), it’s durable enough to take a beating and still get its passengers down in one piece.

Still widely used despite its older technology, the DX-9 is a common sight in the landing docks of the more budget minded military and mercenary outfits. Also due to being mass produced from standardized parts, the dropship is also one of the cheaper ways of getting boots ground-side and has become almost standard issue amongst many militaries. So widely used is it in fact that many recognize it as the only drop ship in existence, simple familiarity guaranteeing continued sales. 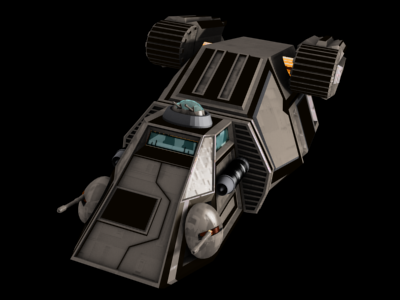