Boasting the greatest passive defense of any freighter under forty meters long, the Starlight-class Light Freighter is often the preferred choice for pilots needing to get smaller quantities of goods into hostile locations. Shaped like a giant wing, the central spine of the ship holds the engine and cockpit, while the wing section holds the passenger compartments and cargo space. From the central corridor two additional rooms may be accessed, often fitted as spartan quarters. A separation can be made between the different sections for either loading cargo or boarding passengers.

The tip of the wing is fitted with the only offensive weapon the Starlight has, a heavy laser. With the added defensive structures built into the ship, designers didn't want to further reduce the available cargo space by fitting more or larger weapons on the ship, and had it not been for the insistence of one of the lead designers the ship likely wouldn't have had any weapons at all.

As it stands, the Starlight has limited living space for up to three passengers and pilot. With a modest hyperdrive and decent sublight engines, long trips are certainly bearable for most passengers. Due to its use in often hostile areas, a powerful sensor package helps pilots to avoid the bulk of potential confrontations before they begin; of course, the defenses of the ship were created to withstand quite a beating if a battle couldn't be evaded. 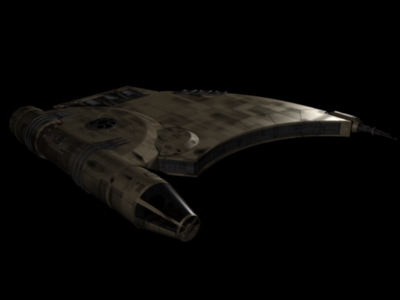