Originally created as a cheap alternative to slaves and laborers alike, the 4SOS model droid has proven extremely popular among all kinds of businesses and families. The droid's design utilizes common parts and it has only basic maintenance requirements, which initially allowed its manufacturers to sell it to sentients who were not capable of managing or maintaining a more sophisticated unit. In addition, the 4SOS has a solid construction that does not adversely affect its work rate while at the same time allowing for a good carry capacity. Thanks to both its simplicity and effectiveness, the 4SOS remains a common sight throughout the galaxy.

The 4SOS found widespread use as a cheap, unskilled labor droid after its initial release, and is still available in the used market. While it can be left on its own for simple jobs, such as stacking boxes or serving customers, it has an underdeveloped AI and needs supervision if given more complicated tasks. Its programing also gives the impression that the unit enjoys any task it is given; making it a joy to work with for some and an annoyance to others. Still, 4SOS droids can be found throughout the galaxy doing everything from working in mines to cleaning starships. 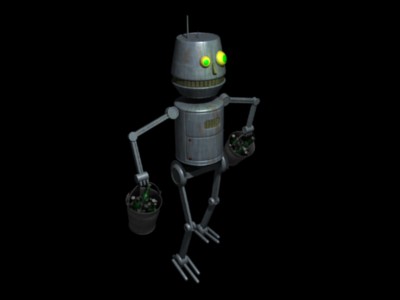