A force detector is a handheld device used to identify and differentiate force-sensitive individuals from the regular populace. At one point in time, Jedi were known to use force detectors to determine who was eligible to join their ranks. The detectors were later used by bounty hunters to confirm that a captured sentient was actually force sensitive.

The detector is made of two thin, sheet crystal foundations connected to a control pack, which is powered by rare thaissen crystals that are found only on Mimban. When the crystals come into contact with each other they invoke an ethereal field of energy that connects with the force the way midichlorians do. A soft hum emanates from the detector's structure as it performs a scan, and once complete, a hologram of the scanned entity appears from the small holo-projector connected to the edge of the device. If a lighter blue corona appears around the hologram, then the sentient is considered force sensitive. An individual with normal, or basic connectivity to the force would have no such corona, and a corpse would not register at all. Sometimes, the corona can be red, which is rumored to suggest that the user is more easily susceptible to a phenomena described as the 'dark side' of the force or currently studying in fields of force lore which are classified as parts of the 'dark side'. However, as the corona itself is rarely observed in the general population, the accuracy of that presumption is questionable.

Over the years many force detectors have been lost, destroyed, or kept hidden in private collections. The remaining number in the galaxy are extremely valued antiques, especially the few still functional. 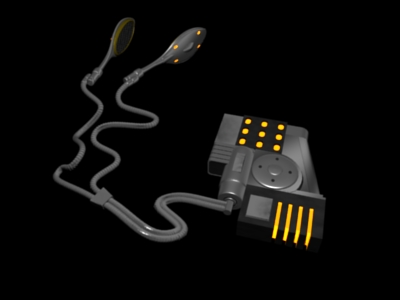