Believed to be an example of parallel evolution, duracrete slugs evolve over long periods of time on worlds with dense construction, especially ecumenopolises. As artificial habitats replace natural ones, adaptation is critical to survival. Duracrete slugs have evolved to consume the duracrete used in the foundations of buildings and world-cities. After metabolizing the material for nutrients, the slug exudes the remaining minerals onto its body, forming a tough, armored skin. Thus, the duracrete slug's food is also its protection. This duracrete exudate also helps to camouflage the slug. While most duracrete slugs have a mottled tan coloration, this can vary if the slug consumes duracrete that contains bonded pigments. While paints are either metabolized or excreted as waste, pigments attached to the mineral components of the duracrete the slug consumes become part of the exuded armor. The duracrete slug literally "is what it eats," and its appearance reflects this.

Because they lack both sight and hearing, duracrete slugs rely on both chemoception and tactile perception to detect the world around them. Although a pair of tiny black eyes remain on the slug's head, these appear to be entirely vestigial, their usefulness lost to millennia in the galaxy's dark undercities. Instead, spiked tentacles along the body contain specialized receptors that allow the slug to detect the chemical composition of surfaces they contact, or even in the dust immediately around them. A series of flexible tentacles on either side of the mouth contain a much denser concentration of these receptors.

Curiously, duracrete slugs do not typically consume unused construction supplies. Instead, these easily consumed materials trigger a mating response. While the slugs reproduce hermaphroditically, they may carry the resulting eggs until they find a suitable place to lay them. Unfortunately, the microscopic eggs are easily missed by loading crews who then ship the materials to local or interplanetary construction sites. As a result, duracrete slugs can be found throughout the galaxy wherever trace quantities of duracrete may occur.

Duracrete slugs are considered a nuisance creature almost everywhere they are found. They present a threat to building foundations, so their extermination is almost universally encouraged. A mature slug can grow to roughly the size of a cargo skiff and weigh up to a ton. While they are not aggressive, a duracrete slug merely investigating an armored sentient to discover it is not food can be extremely dangerous. Keeping one's distance is strongly advised. 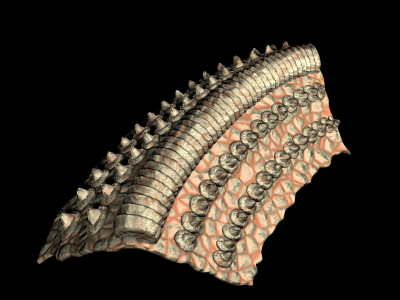