The Xanadu-class superyacht was an undertaking by several self-styled ship designers from the Core Worlds that has been picked up and passed on as whims, fancies, and fads passed. The original design was fostered back in the Old Republic Era; a new hull design based around the aristocratic houses of the time. A central atrium allowing hangar access and central views was the core of the aesthetic; pushed away from the promenade were the staff entrance, engineering areas, and a forward meeting area. The lack of forethought relegated to protecting the passengers and crew from hostile actions dated back to the initial design. A complete lack of escape pods or defensive weaponry, lighter armor than other ships its size, and a pittance of deflector shields meant only to keep small asteroids at bay are all reasons this design was never commercially viable as a luxury yacht for outside the Core Worlds. The hyperdrive and sublight drives were noticeably weak for the ship's hull which was oversized to maximize space and comfort of passengers during their trip to pleasure destinations. The designers were looking for relaxing flights rather than fighter-like rallies, meaning that overall maneuverability was not on their priority list.

The initial cost of the hull before modification is not as astounding as one would assume; the armor and outer hull being thin as possible to allow maximized space and minimal weight for customization, personal preference, and crafter’s whims. A specific construction of the hull was needed to support the extravagance the designers envisioned within the promenade rooms and the drives needed to push this massively opulent ship through space and atmospheres of the most luscious destinations in the galaxy. The construction notes on the plans for the ship called for some of the finest consumer materials known at the time of each addendum.

Once the basic design and production outlines were completed, the plans laid largely abandoned and forgotten for quite some time. Occasionally, an amateur architect would find the plans and add their own touch, whether good or bad, to the design. Maybe they wrote a note about how this design could be re-purposed for this or that. Yet, the ship still was left on the wayside for other more readily available ships. The cost to build this ship was prohibitive to most only because it is so extravagant. The opulence that was built into the ship itself requires so many specific types of crafts that the cost of labor alone is extravagant and bordering on the total monthly revenue of a small sector.

Some of the more obscure and esoteric notes on the design called for an overhauling of the ship for various specific roles. Several were scientific in nature; an oceanographic design, a geological survey design, and an archaeological design are the most notable designs of this type. A different overhaul called for a luxury transport liner; still, another called for the near complete gutting of the ship and turning it into a nomadic home for a wealthy family or coterie. The design is one that is exceedingly rare and not altogether absent from the galaxy; attributing to the above reasons, this ship never saw commercial production, as much as it is the custom oddity of a hangar collection for the extremely wealthy and influential. 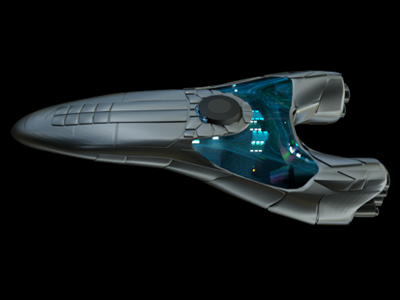