The Tsmeu-6 Personal Wheel Bike was originally created by the Z-Gomot Ternbuell Guppat Corporation for use as an all-terrain military reconnaissance vehicle. Its chassis consists of two wheel-like structures based upon a central low point of gravity hub. Each of the wheels is actually geared into the central hub which contains a Mark IV Rovak Fission Generator. Along the edge of the dual wheel like structures are deployable spike grips that allow the wheels, when in motion, to gain traction on almost any type of surface.

The central hub also contains a basic type four-twelve automaton droid brain. This not only maintains the gyrostabilizer in the central hub, but assists in the stability of the vehicle. A quadruped walking mode was developed as the vehicle is not able to handle tight maneuvers at high speeds. While the wheel bike suffered in overall speed with the added tonnage of four leg structures, they were able to incorporate it into the gyrostabilizer network that keeps the pilot and MkIII weapon package stabilized while the wheels are in motion, this allowed for an additional light blaster to the original design package.

The wheel bike had a retractable seating system that allowed it to fold up into relatively confined spaces. When deployed, the weapon system, powered by the vehicle's overcharged fission generation system, would activate and automatically lock onto targets that were designated by the wheel bike's command module. In its original test bed when presented to military minds, was to have a cybernetic link with the vehicle so as to be able to easily control most of the functions of the wheel bike while the sentient that drove the vehicle focused more on staying seated in the wheel bike's high gravity turns and maneuvers which could even allow it to climb vertical surfaces.

The vehicle excelled in the area of light recon; however, the command module was fully exposed to return fire. Due to this design flaw, there were high attrition rates among those who piloted it during combat and troops coined it the 'Wheel of Death.' Even those who survived combat would suffer high casualty rates as the high maneuverability of the craft was not countered by an inertial dampener, which meant that unless the pilot was exceptionally strong the possibility of sustaining damage from sudden turns or jumps was high.

After an unsuccessful and short lifespan in common military use, the Z-Gomot Ternbuell Guppat Corporation adapted the Tsmeu-6 for civilian use. This meant the use of the cybernetic link was removed in favor of using the default droid targeting system encased within the central hub. Attracted to the bike's speed and unusual design, the maneuverable craft found a new home among various racers of the galaxy, at least temporarily. Many mining corporations also adopted the Tsmeu-6 as a surveying vessel for its combination of speed and ability to cross various terrains. Several resorts and civilian transportation groups also purchased modified Tsmeu-6's, made with an extra seat in place of the cannon. These were used in regions filled with canyons and sinkholes, such as on the planet Utapau. 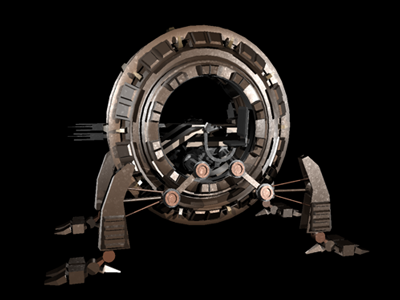