The Reconnaissance Troop Transport (RTT) is an infantry carrier originally built by Santhe/Sienar Industries for the Galactic Empire. Though no longer an integral part of the Imperial ground fleet, the RTT is still deployed to backwater garrisons and commonly seen in use by local militia, urban police squads, and rebel forces.

RTTs were originally designed to accommodate a three-man crew within the cabin while carrying six troopers in external "pods." Later modifications to the design streamlined the electronics and sensor package, which allowed the transport to be operated by a pilot and a gunner, with space for an internal holding cell for a single prisoner or droid. Cargo capacity is sufficient to provide weapons, ammunition and gear for the crew, allowing extended patrols to be largely self-sufficient.

Surplus RTTs are available throughout the Galaxy on many worlds, usually in the original configuration employed by the Empire when Santhe/Sienar were still producing them; other firms have been rumored to have produced identical or nearly identical versions as well. 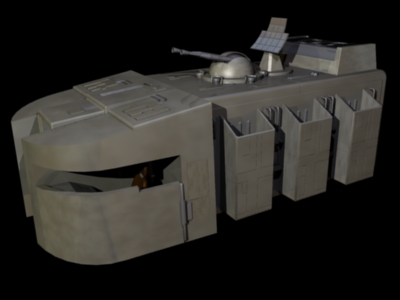