The Armoured Attack Tank (AAT) is a repulsor tank mainly used by the Trade Federation. The AAT's repulsorlift engine allows it to be elevated one metre above the ground. All the components and essential systems, including the main reactor and power generator, are located at the rear of the craft, where they are better protected from enemy fire. The tank's crew is usually made up of four battle droids, a commander, a pilot and two gunners. However, on some occasions the crew is made up of living organisms. The craft's pilot and two gunners are stationed in the cockpit, while the commander is usually seated inside the main turret where he will have access to the battle sensors, communication network and all secondary systems.

While the tank may be slower than other tank designs, it is equipped with powerful armour, making up for its slow speed. Its main armament is a heavy laser cannon mounted on a central rotating turret. This gun is ideal for attacking large targets from a distance. The main laser cannon is supported by two forward facing blaster cannons, located on the sides of the hull, allowing the AAT to attack nearby troops. A concussion missile launcher is also available and is located at the bottom of the vehicle. There are six available exit hatches for the missiles to exit from. Each AAT can carry up to 55 missiles, stored at the back of the tank. In order to enhance the missiles' effectiveness, each shell can be infused with hot plasma to increase the destructive force. When the vehicle is out of ammunition, it is returned to its base or carrier, where the empty lower tray is replaced with a full one. 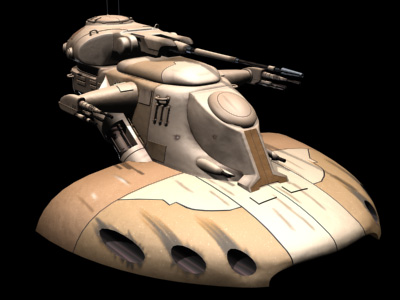