Manufactured by several medium to large engineering conglomerates, the MTV-7 is a single seat all terrain reconnaissance vehicle used by many security departments attached to low level mining and prospecting operations. Their popularity has also seen local constabularies and police forces use them to good effect as light patrol vehicles, as it is able to cover ground quickly and efficiently. Herders and farmers have also used these vehicles to defend their livestock from rustlers. It is not known who the designers of the MTV-7 were, but early examples were in use by the Imperial Army during their inception.

The light and medium blasters on this vehicle make good use of the swivel mounting and are placed on the same fitting in front of the driver for maximum advantage when targeting. Designed as an all-terrain vehicle, the MTV-7 has two barrel-like wheels both held in place by side arm actuators; this configuration allows the open topped cockpit compartment of the vehicle to remain steady at all times. Although fast and fairly manoeuvrable for a small wheeled vehicle, the benefits are few compared to the disadvantages.

Not designed to resist major attacks or participate in battle the MTV-7 has little armour, ionic capacity and sensors. Though in the past, several upgrades and modifications have been attempted to make this vehicle combat capable but all have proven fruitless. It is still valuable in its original purposes being used as a reconnaissance and light patrol vehicle. The popularity of the vehicle has declined in recent years but it can still be sighted in some places across the galaxy. 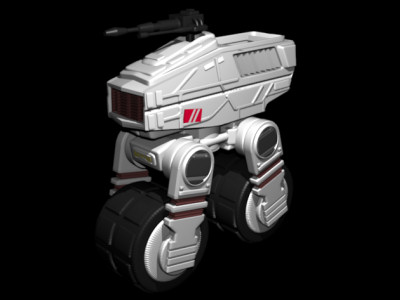