The Juggernaut's engineers introduced a radical change to the style of previous military vehicles used by the Republic army. Instead of devising a variation on the walker, the engineering team decided that a more stable system was necessary. They placed the new structure on five pairs of large wheels, giving it the nickname, "The Rolling Slab". Despite seeming somewhat archaic, this approach proved very effective because direct contact with the ground protected the vehicle from electromagnetic attack. Each of the Juggernaut's wheels had its own suspension, making it easier for the vehicle to travel across harsh terrain. Indeed, the tank was able to achieve astonishing speeds for a land based military vehicle.

The most innovative feature added to the Juggernaut by its engineers is the double cockpit system. Noting the exasperating slowness of the vehicle when turning, they decided to integrate two cockpits, one on each side of the vehicle. This way, the Juggernaut could simply move forwards or backwards without needing to turn because both cockpits were fully equipped and can be used to take control of the vehicle at any time if the situation required it. To avoid mistakes that could prove fatal during complex maneuvers, the navigation system is perfectly coordinated at all times.

As a troop transport, the Juggernaut was designed to carry up to fifty fully equipped combat clone troopers, in addition to several light vehicles. Twelve crewmen were originally needed for its correct operation, but later models reduced the number to eight crewmen, a pilot for each cockpit, and six gunners. 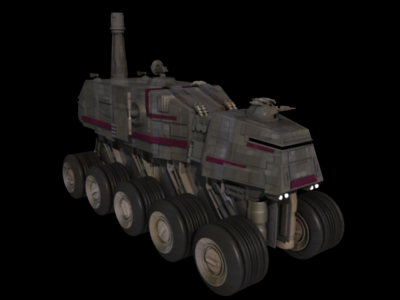