The SRV-1 is relatively new in the galaxy, created by the New Republic shortly after it's initial inception. It is designed as a military transport vehicle, capable of deploying scouting parties or retrieving wounded soldiers for delivery to field hospitals in remote locations without being susceptible to EMP mines. It is specifically created to carry troops but features a modular rear bed that can be configured to accommodate speeder bikes and other small vehicles.

The SRV's most distinct feature is its use of treads over repulsorlifts. While this limits its ability to transverse certain terrains, it allows the truck to operate entirely mechanically, reducing its electronic signature on scanners and making it effectively immune to EMP attacks that might ground other repulsor vehicles. In addition, the treads allow the SRV to carry much heavier loads than a repulsor of the same size. The SRV also features a rudimentary integrated sensor array and a long-range transmitter that can send data across the battlefield. Mounted on top are two medium blaster turrets in case of direct enemy contact as well as heavy durasteel plating that is moderately resistant to light blaster fire. However, the back of the vehicle is completely uncovered to reduce weight and increase cargo space, leaving any speeders or sentients inside exposed to fire. For this reason, the SRV isn't typically used for frontline deployment of soldiers and rather operates on the periphery of the engagement, providing essential intelligence to central command. The SRV-1's significant lack of speed and versatility is its biggest drawback but its capacity to deploy both troops and speeders in a relatively safe way means that it still sees service on the battlefield, especially on open terrain such as grassland and desert. Its dual blaster turrets mean that the SRV can provide covering fire in a pinch and comes in especially handy during tactical retreats.

During the fall of the New Republic, many of these vehicles became lost or destroyed. Production slowed to a halt and the datacards used to produce them disappeared. Now the SRV-1 is a rare sight in the galaxy, mostly seen in the hands of collectors, New Republic sympathizers, and the occasional mercenary unit. 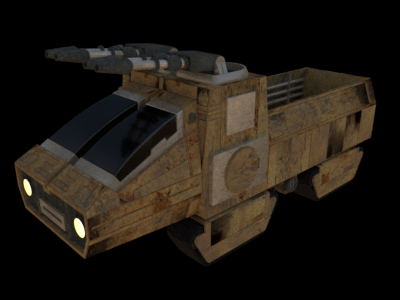