The Galactic Empire's All Terrain Scout Transport (AT-ST) was created for reconnaissance missions, and offers very useful combat cover to ground troops. These vehicles are usually carried aboard shuttles and can be quickly deployed. Faster and easier to handle than the huge All Terrain Armoured Transport (AT-AT), these two-legged scouts can move quickly across open terrain. They are also able to operate in canyons and forests, where bigger and heavier vehicles are useless.

AT-STs are less armoured and equipped with fewer weapons than the AT-AT. They are often used together with the larger craft, covering their flanks and eradicating any small-scale defensive posts or groups of enemy troops that are able to evade the AT-AT's heavier weapons. Because of their manageability on rough terrain, AT-STs are especially feared by infantry; escaping from them on foot is near impossible.

The AT-ST's main weapon is the twin blaster cannon mounted on a turret over the front section. Inside the aft sensor compartment there are two twin light laser canons (also mounted on a turret), and in the starboard compartment there is a grenade launcher. The vehicle's head can turn independently of its walking legs, so the pilot is able to fire its laser canons in almost any direction.

Each of the walker's two powerful legs is equipped with steel claws able to cut wires or traps that had been set up to trip the walker. These huge claws are also used to keep enemy troops from attacking from below. Strong armour protects the cockpit, and only a heavy blaster canon can penetrate the AT-ST's hull. Even in that case, though, several direct hits are needed to cause serious damage to the walker and stop its advance. However, the AT-ST's weak point is its balance. It can easily topple over as a result of traps, pits or explosive charges set in the ground. For this reason, the AT-ST is usually escorted by infantry that are able to detect and remove any traps placed by the enemy.

The AT-ST usually has two crew members: a pilot and a gunner. They enter the vehicle through the upper hatch, even though pilots can also enter by climbing the clamps on its side. In military bases, special platforms are used to access the cockpit.

The cockpit is equipped with various screens and a holoprojector to assist the pilot in controlling the AT-ST. The navigation computer can turn the walker around when the craft is on a regular surface, but the pilot's skill is necessary on rougher terrain. The pilots use the information provided by the sensors to scan an attack area, and the vehicle's advanced telescopic sights afford them a superior advantage over most targets.

AT-ST walkers have a unique navigation system. A powerful gyroscope allows the vehicle to move in straight lines, almost like a two-legged living creature. Ground sensors placed on the leg pads provides the navigation computer with all the necessary information relating to the surrounding terrain, thus allowing for a safe and balanced advance with each step. There are sophisticated cushioning systems inside the legs that are designed to help the craft to maintain a stable balance, even if it has been badly damaged.

Because of its small size, the AT-ST has a limited range. Since a full-sized fusion generator would be impractical in such a small and agile vehicle, it uses disposable high-intensity energy cells as a power source. 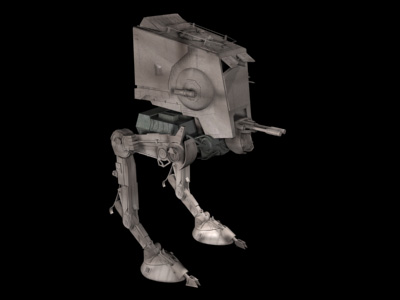