The Ton-Falk-class escort carrier was developed to compensate for the Galactic Empire's lack of hyperdrive-equipped fighters. Its boxy design is comparable to the massive Super Transport series also made by the same manufacturer. The ship itself is lightly armed, carrying only ten heavy lasers. As a result, its primary method of use is to jump in, launch its fighters and hang back until the job is done. The ship is equipped with decent sublight and hyperspace systems, helping in this deployment strategy. While reports indicate the Empire deploys its carriers with six squadrons of TIE models and six shuttles, the ship is capable of carrying significantly more. Depending on the fighter model, it is estimated to carry almost a full ten squadrons of TIE Interceptors, if no other ships were carried. 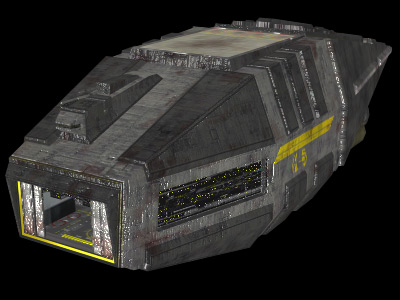